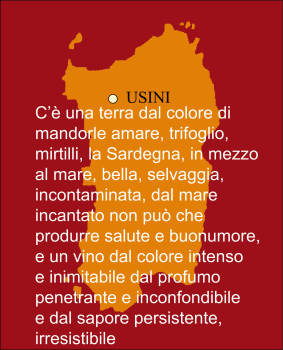 The island of Sardinia covers 24.098 km². The territory is mostly hilly (67,9%). The portions of plain occupy a surface of 18,5% compared to full extension. The mountain (13,6% the entire territory). reach the highest elevations between the peaks of the Massif Gennargentu. Sardinia, an island with tourist for its notes and endless beaches, for its carved rocks that seem to surprise, imperishable work of an expert and certainly unsurpassed as unmentionable sculptor. No less wonder that raises its climate combined with a diverse landscape lends itself to undertake a number of activities in agriculture. Excels in the production of wine determined by the urgent request of a consumer ever more demanding and at the same time comforted by a product offering remarkable quality that seduces and intrigues.

The territory of Usini at this time produces wines of undoubted exclusivity which the wine Cagnulari which is given by a native vine in extinction and in any case the product in the past to be mixed with other grapes to improve the weak structure, color and scents. 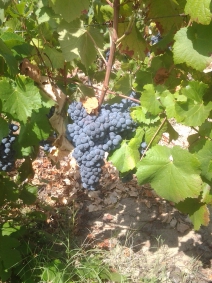 The conformation of the bunch Cagnulari is presented in a compact manner. The berries are small, hundreds of dots to form a body similar to a triangle result of a project that otherwise could not be. Fantastic and perfect design of the weird, secret nature. A masterpiece to highlight the diversity and originality of a plant that has been entrusted with the task of communicating a number of valuable properties olfactory and gustatory engaging and rewarding at the same time combined with the wealth of organoleptic substances make this wine a more more indispensable companion safe and healthy eating.

The grape is a lady Cagnulari grapes and like all good and true gentleman requires particular attention. It is susceptible to the harsh climate but also influenced by the sultry heat. A similar plant so demanding could not find its ideal habitat in the rolling hills of the area as restful of Usini always with a vocation for the production of wine.

The vineyards of the winery GALAVERA are located in various parts of the territory of Usini, Pirapeglias, Sa Sa narulas and luzzanas occupando one superfice di 9 ha; a large open-air laboratory where they are committed to the most diverse skills. Remarkable that the presence of the winemaker, the collaboration always dispensed and never denied by mother nature, has the duty to supervise and interpret every little change in the plant. A constant commitment, daily which begins in January with the pruning and ends in September / October with the harvest.

The cutting of excess bunches is a ritual that takes place in late August. A necessary sacrifice without which it becomes impossible to obtain a wine with all the requirements that the quality demands.

No less attention should be paid Vermentino white wine as a drink that is counted as among the most prestigious in the territory of the municipality of Usini. Usini a good title can boast of being one of the largest producers and especially decantarne its original fragrance that make it unique among all other Sardinian Vermentino. A strong personality given by a bitter taste evident. A distinctive and indelible as pleasant bitter almonds help to give our unsurpassed Sardinian dessert "Amaretto", an irresistible taste that becomes insatiable desire to consume so much for a second and even a third. What to say of his pungent scent of grapes on the block that brings back exhilarating sensations and think of a benevolent nature with man, bestower of emotions.

The Vermentino , not very far away in time, wine was the most produced and most consumed especially in the carnivals of Usini during which, as they say "flowed". Mixed with the gaseous took the name of MISS . Was offered, upon payment of a sum modicissima, the frequenters of the ballroom constantly filled to capacity.

Today it is produced and offered in bottles often with clear glass to highlight and enhance the straw-gold color that is light at sunrise..